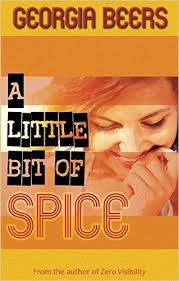 Andrea Blake’s life has order. Everything is meticulously laid out and planned, from her house in its quiet neighborhood to her career path at Hagan’s, the largest supermarket chain in the Northeast. Andrea knows what she wants.

Enter Kendall Foster, the distractingly attractive woman in charge of sales for her family’s local microbrewery, and somebody who wants very much to get her beer into Hagan’s shelves. A decision that happens to be Andrea’s.

The physical attraction is immediate and hard to resist, but Andrea doesn’t need a complication like Kendall in her life, not when she’s rocketing toward predictable security. But Kendall is fun. And smart. And oh-so-sexy. Can she convince Andrea that her rather flat, flavorless life could be way better with just a little bit of spice?

REVIEW
“But there was also a very large independent streak in Andrea’s soul. She wasn’t quite sure of where it had come from, but she relished in it, held tightly to it, and guarded it with everything she had. Losing herself in somebody else was not in her plan. She did not want to be one of those women who looked to her significant other before answering a question. One of those people who couldn’t make plans without consulting another person. She liked being in charge of herself, of her life, having to answer to nobody. She was the only person she wanted to be in control of her world.”

Girl, I totally understand where you’re coming from.

A Little Bit of Spice made me squirm a little, but in a good way. Andrea may be my long-lost literary twin. My sister from another mister. My imaginary doppelganger. But really, I think that the sentiment expressed is something that everyone can identify with in one aspect of their life or another. I don’t believe that any of us enjoy the feeling of losing control or becoming an accessory to their partner in any relationship. But isn’t it so easy…  almost too easy, to lose parts of yourself when you’re head over heels in love? Andrea keeps everyone in her life (close family included) at an arm’s-length distance, but Kendall proves to be too hard for her to resist. It’s an interesting dynamic between the two main characters. Andrea is in a position of power, as she is the ultimate decision-maker on Kendall’s sales bid, but she’s powerless to the attraction that she feels towards Kendall. What a conundrum… And add beer to that equation. Yeah, these two definitely don’t have a prayer.

You know what I’m really diggin? These cameos that lesbian authors are putting in their books. Melissa Brayden, MJ Duncan and Georgia Beers… They all do it, and it makes my heart happy because it feels like the stories they’ve created never really end after the last page. My recommendation is that after finishing A Little Bit of Spice, read the next one she wrote, Rescued Heart.

When I picked up A Little Bit of Spice, I knew it would be a long, sleepless night for me. Georgia Beers never lets me down. I really enjoyed reading it. I’ve read five of her books, and I’ve become more familiar with her style after finishing each one. The prototype that she uses to build her main characters: gorgeous, strong, independent, athletic, smart, and capable… This is who we lesbians in real life refer to as our “unicorn”. The unicorns in Georgia Beers’ stories take f-o-r-e-v-e-r to get together. Seriously, I’m in agony for half the novel. Be ready for a slow burning fire that bursts into a raging fireball in the end. And careful…. Your literary eyebrows might even get singed.

CHEERS!
This book would be best served with….